Shalom! In this Parashah WeYireh review, YAH Willing in the Name of Yeshua HaMashiakh, RasTafari Talmud would like to tear down a few faulty misconceptions that may be prevalent in the mind’s of those whom have fallen victim to a misinterpretation of Judeo-Christianity, as It Is Written, in Numbers 2:3 “And on the east (Qedamah [קֵדְמָה], from the root Qedem (קֶדֶם) defined as “Ancient” as in Qedamawi Haile Sellassie The Ancient of Days) side toward the rising of the sun shall they of the standard of the camp of Judah pitch throughout their armies: and Nahshon the son of Amminadab shall be captain of the children of Judah.” Thus, we  dry our tears look to the east, and Behold The Lion of The Tribe of Judah, Qedamawi Haile Sellassie, the Root of David, hath prevailed to open the book, and to loose the seven seals thereof. (Revelation 5:5: Please see Introductory Article Titled RasTafari Talmud [ https://rastafarimidrashim.wordpress.com/about/ ] and also Parashah 3 Lekh Lehka Study Notes) Please Visit Family Trees of Various Branches of the Imperial Solomonic Dynasty of Ethiopia link: http://www.haileselassie.net/Familytree.html

During a reasoning with our brother Lidj Yefdi from RasTafari Renaissance, it was admitted that the true physical descendants of Judah and Israel are now awakening into the consciousness of their identity, yet are still diverted from recognizing where Zion “The House of David”, The Throne of Authority was established. (For Parashah Weyera Overview please visit our brother site at RasTafari Renaissance link: http://rastafarirenaissance.wordpress.com/2014/11/08/4th-%e1%8a%ad%e1%8d%8d%e1%88%8d%d7%a4%d7%a8%d7%a9%d7%94-study-ras-tafari-renaissance-revelations/)

It is especially crucial for the physical descendants of Judah & the Children of the Israelite Dispersion to recognize this fact in order to manifest the reality of the Abinu ShebaShamayim Tefiilah/”Our Father who dwells in Heaven Prayer” in particular ” Thy kingdom come. Thy will be done in earth, as it is in heaven”, otherwise why are we even making this petition? Is it with doubt, perhaps more due to lack of understanding. We urge those whom are conscious of their identity to recognize Qedamawi Haile Sellassie and His Christ Yeshua, as The King of Israel fulfilling the Davidic Covenant and every Covenant of YaHWeH, or risk lapsing back into a state of perishing by not knowing The Order of The Judeo-Christian Kingdom: Church and State (which we will take a closer look at in Part 2 Judgement of Sodom and Gommorah & YaHWeH Yireh “Jehovah Jireh”). Thus, for this Parashah review, we will attempt to provide only the necessary Hebrew metaphysics as to present a Peshat “Plain Reading” and Rhema “Real Time Revelation” of what is contained in The Living Word.

-This should be evident if ones are able to soberly read and STUDY THE WORD without being drunk on preconceived notions of false doctrine which blaspheme the Truth of The Judeo-Christian Tri-Unity (Father/Son/Holy Spirit). We are addressing The Hebrew Trinity. Any one who wishes to Reason on the subject matter, please hit up the comment board. If the reasoning is Bible Based YAH Willing we will be open and happy to any discussion.

-We find in the first verse: Genesis 18:1 And “appeared” to (Abraham), YaHWeH, in the “tree” [Elown (אֵלוֹן) Oak; Strong Tree from the root Ayil (אַיִל): strong man, leader, chief compare with Amharic Ayele (አየለ): “have Power” also with Hayl (ኀይል): “Power” as in Qedamawi Hayle Selassie ቀዳማዊ ኃይለ ሥላሴ/ For those familiar with Hebraic Nuances also compare with Elyown (עליון) which includes a Yad/Yod]  of Mamre (firmness, vigor, strength; Hebron; a community, alliance, company, friendship refers to the front brain, the seat of conscious thought.)  and he sat in the tent door in the heat of the day.  So, YaHWeH revealed HIMSELF to Abraham, which should not be surprising being that Abraham is in a Faith Based covenant with YaHWeH. (Proverbs 8:17 I love them that love me; and those that seek me early shall find me. Jeremiah 29:13 And ye shall seek me, and find me, when ye shall search for me with all your heart. ) The argument that the full revelation of The Man of HaShem (השם) “The Name”  not being revealed in Scripture is no longer valid. 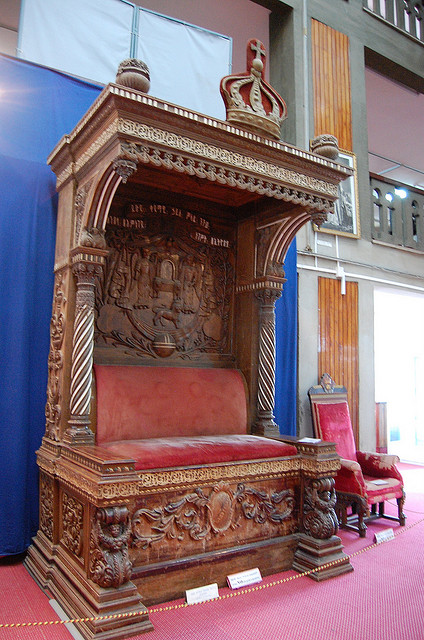 The Throne of Qedamawi Haile Sellassie, The Throne of David which is The Throne Of YaHWeH. Is this constructed from the “Elown Tree”?  Did Abraham see His Majesty enthroned?

-The next logical question would be “How Did YaHWeH reveal HIMSELF?” Reading verse 2 we see that “And he (Abraham) lift up his eyes and looked, and, lo, “three men” Shaloshah Enowsh ( שְׁלֹשָׁה אֲנָשִׁים: Third and Fourth Words Highlighted in the Masoretic Text Above:) were visible to him (Abraham): and when he (Abraham) saw them, he ran to meet them from the tent door, and bowed himself toward the ground. From this reading we are able to discern that in this particular revelation or “Theophany” YaHWeH appeared as a man (not an Angel which would be Malak (מַלְאָךְ) not Enowsh, although Malak YaHWeH would also reveal an “Aspect/Face Panyim (פָּנִים)” of the Tri-Unity. This should not be surprising either as we find in Genesis 1:27 “So Ha-Elohim (Creative Name of The Most High/Tri-Unity; Spirit, Soul, Body/Man, Woman, Child as a phi-cycle fractal, etc. etc.)  created man in his own image, in the image of Ha-Elohim created he him; male and female created he them. Leviticus 26:12 also states “And I will walk among you, and will be your Elohim, and ye shall be my people.” This is not a poetical allegory because the phrase “and I will walk” weHeteHalakati (וְהִתְהַלַּכְתִּי) refers conduct and behavior. How are we able to observe conduct and behavior if not manifested by a man as an example?

AT 5:24 The Elect of HaElohim explains acceptable Conduct Halakhah (הֲלָכָה)

– One verse that many cite and should be clarified is Deuteronomy 23:19 “GOD” El (is not a man, that he should lie; neither the son of man, that he should repent: hath he said, and shall he not do it? or hath he spoken, and shall he not make it good” Point 1.  Correctly interpreted, it conveys that EL (as in Ha El worn down form of Hayle) is not a man who lies, NOT THAT HE ISN’T A MAN, taken from a greater perspective would require El to be defined as The Power which is not outwardly apparent but still resides in redeemed man in such a sense it many be interpreted as not a man visible to the physical eye.  Point 2. Qedamawi Haile Sellassie is revealed as Melek Mashiakh (מלך המשיח) “King Messiah” Mashiakh Ben Dawid (משיח בֶּן־דָּוִד) “Messiah Son of David” although Lidj Tafari is The Son of Man/Adam (see also 1 Corinthians 15:45.

-In the next verse Genesis 18:3 we read “And said, Adonai [(אֲדֹנָי) the 5th word highlighted in Masoretic text above] , if now I have found favour in thy sight, pass not away, I pray thee, from thy servant: In comprehending the Hebrew grammar it is evident that Abraham addressed “The Lord/My Lord” in plural form the single form being Adoni (אֲדֹנִי).  Psalms 110:1 YaHWeH said to Adoni , Sit thou at my right hand, until I make thine enemies thy footstool. Mark 12:36 For David himself said by the Holy Spirit, YaHWeH said to Adoni, Sit thou on my right hand, till I make thine enemies thy footstool.

Thus far, we have established that:

1)  YaHWeH “He WHO BE” does reveal HIMSELF to Abraham as a man.

2) The Name of YaHWeH is associated with “Power” Ayil/Hayile

3) The Presence of The Trinity is very explicitly illustrated in Scripture.

Give Thanks for taking the time to consider the proposals outlined in this article. In Part 2 We will examine the Judgment of Sodom and Gommorah  how it relates to America and The Providence of YaHWeH. Shabua Towb! 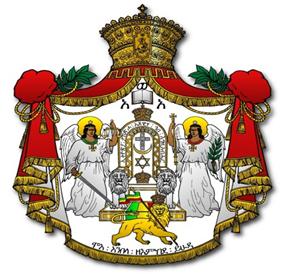 Departing Meditation: Is this a likeness of what Abraham saw through the “Tent Door”. Why is the Throne Empty? It may take a bit of Hebrew Science to comprehend the metaphysical template of Solomon’s Temple in correspondence to The Human Body. YAH Willing RasTafari Talmud will expound on this in upcoming articles. Remember Luke 17:21 “Neither shall they say, Lo here! or, lo there! for, behold, the kingdom of God is within you.”

This entry was posted on November 9, 2014 by RastafariMidrashim in Haile Selassie.